In the first week I had Falcon, I wanted to focus on letting him settle in and also taking him on adventures that will be part of his future life as a search and rescue dog.

The first few days I just let him chill. So many people get a dog or a puppy and immediately take it to the pet store, to visit all of their relatives or something similar. Think how scary that would be for you if you were in a new place and were being bombarded by a constant stream of information. It is far better to let the dog get to know you first and your routine at home before you start introdu

I have a few critical weeks of socialization left; so, I don’t want to make anything scary for him; but I do want him to be exposed in a fun way to things that many dogs that aren’t properly socialized to find scary as adults.

I can train this puppy to do basic obedience at any time in his life; but for the critical socialization period I am j

ust working on going places, being exposed to things and having fun.

While this is a very nonscientific explanation; think of socialization like this. In the first 12 to 14 weeks; the puppy will explore and experience things and be very open to meeting new things and making associations about those things in both a positive and a negative way. If he has a horrible experience during this time period such as meeting a skunk and getting sprayed, the puppy will be worried about skunks forever (useful when you live around skunks). But, if you let the puppy get attacked or over whelmed by bigger dogs during this period, then you just created a possible life-long issue wi

th other dogs. If the puppy meets things and has great experiences, then he is more likely to associate those things as being fun for the rest of his life. So, if he meets lots of people (including children) prior to 12 weeks and he learns that all of those people have food for him, he will most likely go through life being friendly or at least extremely tolerant of strangers.

After this time period; nature steps in and kind of says, “from this point forward, everything novel you meet should be looked at with suspicion until it is proven to be safe.” A good safety net if you are living on your own and your mother dog isn’t around to tell you to stay away from the porcupine.

Socialization is a critical time; especially for a puppy you want to take out into public and expect to work in public.

Socialization is not flooding. Many people think they are socializing when they are really flooding. Flooding is forcing an animal to interact with something or placing it in the middle of a place and letting it just deal with the stress rather t

han providing the puppy with a way to slowly experience novel things at its own pace and with lots of great reward thrown its way for trying.

Think of it this way; you need to work with snakes for the rest of your life but they make you nervous. I could just throw you into a pit of snakes and hope you get over it (cue Raiders of the Lost Ark). Or I could take a very small snake and move it far away and give you a piece of chocolate when you looked at it. If you chose to go closer you get more chocolate; if you didn’t want to go closer; that is ok too.

So, if you take your puppy into a store that allows pets and he is afraid of the sliding door and you just drag him through it because someone told you that you need to socialize your puppy, this is NOT it. I see so many puppies and dogs who are terrified of those sliding doors. One of my dogs worked for three days just watching that door from a distance as it opened and closed and getting treats before he decided th

e door was not as dangerous as he thought it might be.

Letting people swarm your puppy and overwhelm it is also not good socialization. Allow the puppy to go up to people and get treats on its own rather than forcing it to receive lots of attention.

Here is an example from my second week with Falcon. I was taking a break from puppy class and we walked outside to the potty area. All of the sudden Falcon went still and stared intently ahead then started barking and backing up 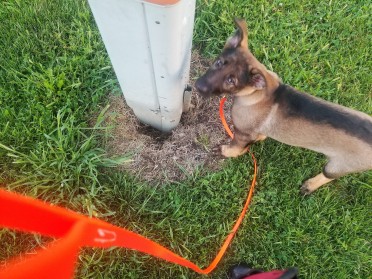 . I looked to see what had startled him and it was a green metal box that holds wires.

cing him to the world.

m the box a few feet; then turned around and he got a click and a treat for looking at it. Then we walked a bit farther away as he was still barking at it. As soon as he wasn’t barking; but could still see it; we did a few click treats for looking; then we just walked in a big circle. If he chose not to look at it; that was fine we just had a nice walk and sniff in the grass. If he chose to look at the box; then he got a bit of hot dog. He started moving closer to the box on his own and in a few minutes he was touching it with his nose and happy as a clam that he figured out touching the box was a fun game. Had I dragged him to that box; he could have become super frightened and I could have a dog that would grow up to be afraid of anything that shape. Had I laid a trail of hot dogs to the box; he would have followed it and then run out of food right when he got to the scary box; again; not a good plan.

Please read Social, Civil and Savvy  by Laura VanArendonk Baugh. This is a great book to help you understand how to help your puppy or dog have the best time in public or in your home.