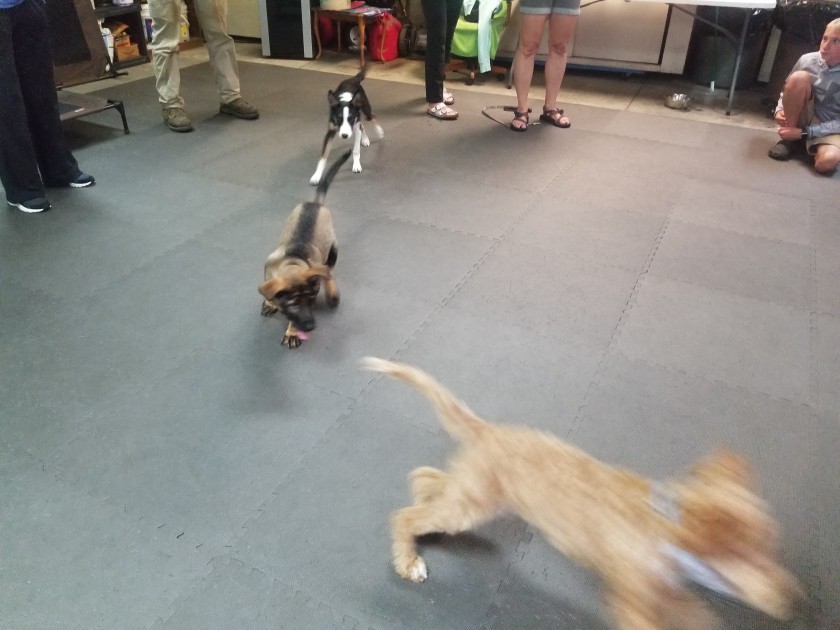 Just like with children; taking puppies to school is very important for their behavioral health. Puppies learn to engage with other puppies; they see other puppy owners and they go to places where interesting things happen.

Unfortunately, puppy class can be controversial. There are people, including a few veterinarians, who tell owners not to take their puppies out until they are fully vaccinated. For some puppies that isn’t happening until four or five months.

The issue is so divisive that the American Veterinary Society of Animal Behavior has put out a position statement. They recommend that puppies go to class as long as they have had one set of vaccines and have been dewormed. The statement says it is safe to take puppies 8 weeks of age to class.

“Behavioral problems are the greatest threat to the owner-dog bond. In fact, behavioral problems are the number one cause of relinquishment to shelters. Behavioral issues, not infectious diseases, are the number one cause of death for dogs under three years of age,” according to the position statement. So, if your veterinarian or someone else tells you not to take your pup to class; show them this position statement.

I recommend puppy classes that allow plenty of off-leash puppy play time. You can teach your puppy basic obedience at any time. But, you have a short window of time to help your puppy understand how much fun other dogs and people can be. Look for a puppy class where the trainer has experience in canine body language. You want to ensure someone is looking out for your puppy’s wellbeing. There may be the occasional puppy that isn’t good at puppy play. If play goes wrong you want someone who will step in and stop inappropriate play.

In the five years I taught puppy classes I only had three puppies that just could not play in group class due to inappropriate play (they all over stimulated and bit and pinned puppies without giving the other puppies a chance to get away).

However, I had numerous puppies that were nervous on their first day of puppy school and just wanted to hide under a chair. This is ok. I see so many owners who want to push their puppies into play, but you want your puppy to play when it feels confident. If your puppy just wants to watch; that’s ok. In my experience the vast majority of puppies that ended up hiding on their first class were confident and happy by the last clas

s. Pushing the puppies into play though can make the puppy more worried than he should be.

Most puppy classes have puppies of various sizes and within a 2-month age spread. There is a huge difference between a four-month-old chihuahua and a two-month-old great Dane puppy. The size difference is what most people see; but the  chihuahua may be more mature and want to play; but the larger puppy may be clumsy and unsure. Don’t go by size alone when deciding which puppies should play together. You want large puppies to be able to figure out how to play with smaller dogs and small dogs need to know how to play with larger breeds.

I like puppy classes that have the ability to gate off areas of the class in case there are puppies that need to be separated by play style or maturity. I would often gate off the rambunctious puppies from the shy puppies in the beginning so the shy puppies would not feel overwhelmed.

Size may not be as much of an issue as you might think. I often see confident small breed puppies successfully playing with larger breed pups.

During puppy play you will most likely hear your puppy yelp or see him fall over. Can your puppy be injured?  Absolutely, but the vast majority of puppy play sounds scarier than it actually is. Avoid the urge to rush in

and “save” your puppy unless he is seriously in trouble (and then the trainer should be the one to stop this). Puppies learn that biting hard hurts and makes play stop (you will appreciate this later when they learn biting you too hard makes you go away as well). I often had puppy parents who would helicopter over their pups and try and remove them from play if they gave a little yelp.

If you are worried about your puppy, stop play between the pups for about five seconds and then let your puppy go. Does he rush right back into play? If he does; he was having fun; if he takes that moment to go and hide then re-evaluate what is going on.

I also like puppy classes that have strange things for the puppies to interact with on their own during play. Tunnels, wobble boards, teeter boards, different surfaces, e

tc. Puppies can watch other puppies go through a tunnel and decide it is fun. They can step

In my puppy classes; I always saved the last 10 minutes or so for questions. I think it is important for puppy owners to know they are not alone with a biting puppy or a puppy that isn’t house broken. I would often have puppy parents comparing bruises and bites. It made everyone understand their puppy was not unusual.

I’ve taken Falcon to two different puppy classes. If I had the free time and they were closer I would take him to numerous classes so he could meet more puppies and other facilities.

Whatever puppy class you choose; make sure it is a positive, reward-based class. Do not let someone talk you into a prong collar or a choke chain for your puppy.

“Classes and at-home training should be based on positive reinforcement with frequent rewards praise, petting, play and/or treats. Positive and consistent training is associated with fewer behavioral problems and greater obedience than methods that involve punishment and/or encourage human dominance,” according to the AVSAB statement.

Go forth and play!